The timing of my move from Portland, Oregon and onto my new land in western Maine is complicated a bit by the time of year. As even a casual perusal of the climate data will show, arriving in Maine at the beginning of February and breaking ground on anything would be a futile exercise. 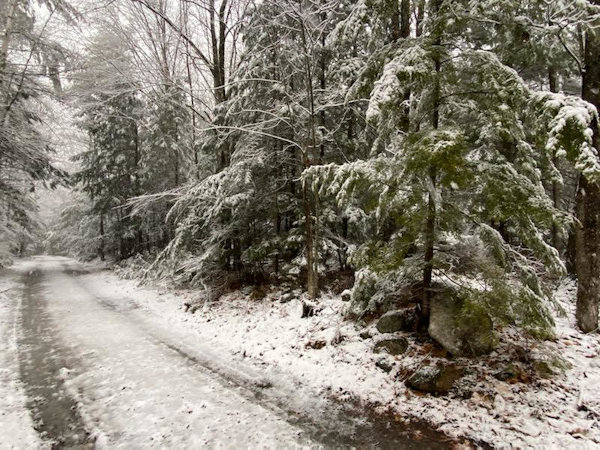 My original plan was to remain in Oregon until the spring, but I received an offer to purchase my studio condo that was too good to pass up. So now I have almost three months with no place to live, and no real place I have to be.

I remember being introduced to the concept of ‘found time’ many years ago. It’s a sudden gap of free time opening up when you otherwise thought you’d be occupied.

I’ve found some time between my current living situation and my next, how best to fill it? I’ll certainly be spending some of it planning for my next phase, since there is plenty of that work to do. But I think the spirit of found time is as a gift, and I’m also hoping to challenge myself to develop a new habit, one that will serve me well in the woods, surrounded by trees and pending manual labor. 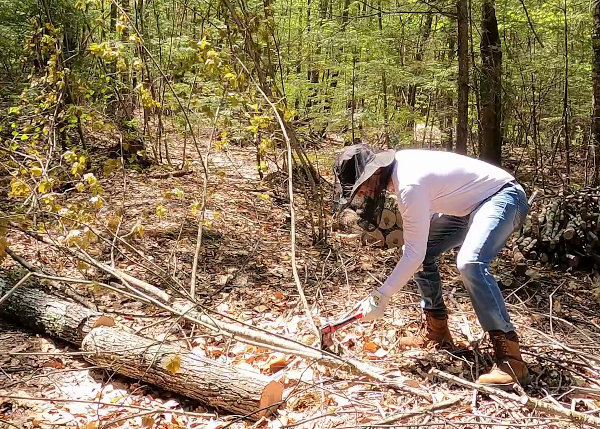 I’ve now spent years pushing myself to do more in less time, and on the verge of overwhelm. This just simply has to change when I hit Maine, or there’s almost no purpose in going. I want to take this time to also build a new habit, the habit of finding a rhythm in my life. It would be great to have the experience of “it’ll get done when the time is right” more often than not.

Why have I driven myself so hard? My guess is some part of me is trying to avoid dying, or doing everything it can to avoid making a mistake that would kill me. There’s a flavor of desperation in my efforts – if I could just get this one more thing accomplished, my life might be meaningful.

In competition with that behavior is the knowledge that in fifty-ish years I’ll be dead, in one hundred-ish years everybody I care about will be dead, eventually the sun will consume the earth, and the entire human race will most likely have gone extinct before then. None of that is breaking news. If I believe in science, and believe that the sun will come up tomorrow, then all those points are not a morbid take, they are the facts of our life on earth.

To keep those facts in my face, I’ve installed a little reminder system: on home screen of my phone, there’s a countdown showing the number of days until my ninety-fifth birthday. Sixteen thousand, three hundred and forty-one as I type these words. Every time I notice that number, it’s lower. Sometimes it scares me, sometimes it motivates me – either way I never get far away from the feeling that every day is precious. 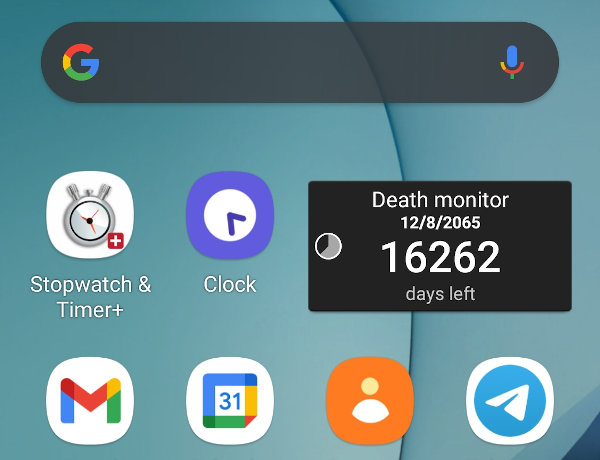 What was supposed to be a three day journey from my old home in Portland, Oregon to my ‘phase one’ incubation in Denver, Colorado instead stretched into a two and a half week mis-adventure, which included three car breakdowns, a computer crash, and three business crises, the last of which almost torpedoed my main source of income for the last seventeen years. To put it mildly, things didn’t go as planned…

Despite many moments of flustration (that’s a combination of flustered and frustrated), I found myself returning to the thought “nothing really bad has happened” over and over again.

What I liked about having that thought is:

The trouble started on the morning of the third day. After waking up in my car at the brightly lit truck stop just off of route 80 in Evanston, Wyoming, I proceeded necessarily to a nearby charging station to top off my Tesla’s battery for the next chunk of travel. No charge was forthcoming, and after an hour of investigating, I was forced to retreat sixty miles east to Salt Lake City, Utah, where the nearest repair shop accepted my wounded vehicle. My mild bad luck stayed the same for the next few weeks, and as I type these words, I still don’t have my car back.

I glossed over something. Why was I sleeping in my car at a truck stop? The simple answer is that for my cross-country trip, I chose to car camp – which probably sounds worse than it is. 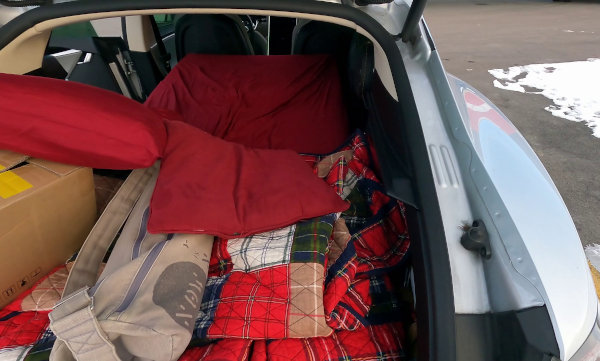 A month ago, if somebody had said the words ‘car camping’ to me, I might have imagined them at a rest stop, reclined in their front seat, catching a thirty minute nap before continuing on. It can, however, be a little more glamorous than that. In my car, if you put the front seats all the way up there’s just enough room to slide a single mattress in the back. A little bit of foam padding and plywood to even out the contours, and you’ve got a functional bed.

But why car camping? Why not get hotel rooms along the way? Three reasons:

Here’s what I’ve learned so far: